It took me three days to cycle from the city of Sakarya to Ankara, the capital of Turkey. During those days I wild camp twice, one day nearby the village of Damlar and the next day near the village of Çayirhan. The weather was still warm and the surrounding sites pleasant.

Before I left the city of Sakarya I contacted a couple of potential warmshower hosts for my stay in Ankara, without any luck. People were responding to my request and apologizing that they couldn’t host me. The timing was just bad; it was the start of the Kurban Bayrami (Feast of the Sacrifice) and a lot of people were on the move visiting family and friends to celebrate the holiday. A brief summary for those unfamiliar with this Muslim holiday:

The day I planned to arrive to Ankara started with a stop in the town of Beypazari. I needed to stock-up on some food and drink a nice cup of çay at a bakery. The place had wi-fi, that gave me the opportunity to search on-line for a hostal in Ankara and track the route on my GPS. I tried my luck and contacted other warmshower hosts, without expecting much responds.

When reaching the urban area around Ankara I though that I almost had reached my destination, but  It took another 40km to arrive to the hostel which was not there anymore. The place was out of business. Frustrated, I started looking around the neighborhood for an alternative. I stopped at a coffeehouse/bookstore to ask the owner for help. He gave me the address of another hostel nearby. I asked him if I could use his wi-fi connection so I could load the google map on my smartphone. Once connected I saw that I had received an email from warmshowers. Evren G. graciously agreed to host me at such short notice!

I stayed at Evren’s home for 2 nights. I must say the time I spend there was the highlight of Ankara.

Evren is a bicycle and sports enthusiast and nature lover. When we were talking about our bicycle touring experiences you could see her eyes spark while she was showing me her pictures of her past trips in Turkey. She is the mother of two wonderful kids. The youngest, Kuzey, is a very energetic child, I called him speedy gonzalez. The oldest Ekin is on the other hand a relaxed kid, acting very mature for his age (11yrs when I met him). To save for buying his own laptop,  Ekin was working after school hours as a waiter at a local coffeehouse. I learned some basic Turkish from Ekin, he took the time to explain himself with some basic examples and using whatever material he could find to communicate with me. Children have a way of simplifying their ideas, while we “grownups” tend to over think it and make everything a bit more complicated than necessary.

The days past for me walking around Ankara visiting the few historical places the city has to offer. At night I had some pleasant conversation with Evren’s flatmate (shamefully I forgot her name) and her boyfriend Osman. Drinking raki, we talked through the night about the customs of our respective countries, religion and our travels. While interchanging ideas, I noticed that we all have the same dreams and fears. I also got to know how passionate Turkish people feel for Atatürk (founder of the Republic of Turkey). I commented to Osman that I had visited the Anitkabir (the mausoleum of Atatürk) and that it had impressed me. I found it a bit to big and nationalistic (in all countries you will find landmarks like these to encourage national identity). Saying that, Osman was a bit surprised about my remarks, and took the time to explain the importance of Atatürk in Turkey in the past as well in the present. During my stay in Turkey I noticed that a lot of the old and young strongly belief in the ideals that the “father of the Turks” represent.

My host in Ankara was fantastic, she took the time to talk to me; share food and joy; she even washed my clothes and sewed a button back on to on one of my pants! I felt very lucky and grateful. I hope she can go on a lot of bicycle tours, and that at one point I can show her the same kindness she showed me!

After saying our goodbyes it was time to hit the road again. 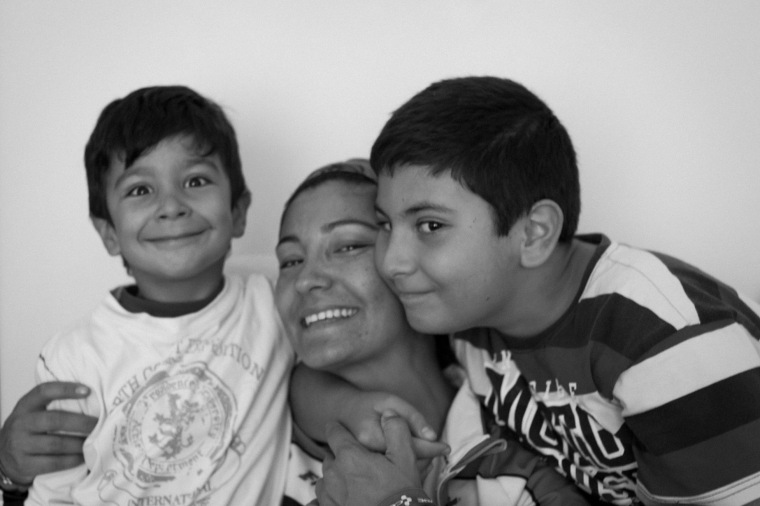 From left to right: Kuzey, Evren and Ekin

Evren with Kuzey, her youngest child